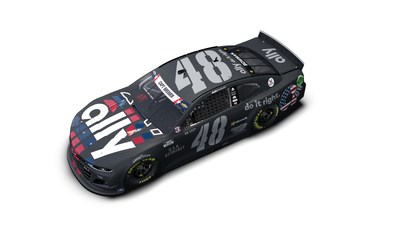 CTE is a degenerative brain disease found in military veterans, athletes and others with a history of repetitive brain trauma. In conjunction with May's designation as Mental Health Awareness Month, Ally is donating a total of $10,000 to the Concussion Legacy Foundation and the USO to further the important research on CTE and its devastating effects. Each organization will receive a contribution to continue their work in conducting groundbreaking research and providing life-saving resources, including suicide prevention, to those afflicted by CTE symptoms and their loved ones.

"It's an honor to drive the patriotic No. 48 Ally Chevrolet next weekend in Charlotte. Our military men and women and their families sacrifice so much for us and this nation," said Bowman, driver of the No. 48 Ally Chevrolet Camaro ZL1 1LE. "It's going to be special having Captain Brewer's name on our car for 600 miles. Through programs like the Concussion Legacy Foundation and the USO, bringing awareness to finding a solution to CTE and PTSD is extremely important."

A recent study involving almost 6,000 United States veterans found that 12.9% were diagnosed with PTSD, nearly double the rate of PTSD found in the general U.S. population.1 From 2013-2019, more than 45,000 veterans and active-duty service members took their own lives, resulting in more deaths by suicide each year than the total American military deaths in the Afghanistan and Iraq wars combined.2 The prevalence of CTE in veterans is unknown, and the Concussion Legacy Foundation's Project Enlist is serving as a catalyst for CTE research in veterans by encouraging and facilitating brain donation. Honoring Captain Brewer, Ally aims to raise awareness of mental health issues many of our servicemen and women, both active duty and veterans, grapple with every day.

"I started the Concussion Legacy Foundation almost 15 years ago after experiencing the effects of repeated concussions myself, realizing there was an imminent need to accelerate CTE research and understand and support the mental health consequences of brain injuries," said Chris Nowinski, Ph.D., co-founder and CEO of the Concussion Legacy Foundation. "The donation from Ally will support our efforts aimed at learning how to prevent, diagnose, and treat CTE through clinical and brain bank research."

Resources related to CTE, PTSD and suicide prevention are available through the Concussion Legacy Foundation's HelpLine and the USO's Warrior and Family Centers. The CLF HelpLine includes a world-class library and referral network to connect those affected by brain trauma with resources, support, treatment options, and hope. In addition, Captain Brewer's brother Brandt McCartney recently launched The 38 Challenge, a workout challenge where participants exercise for 38 minutes to raise funding and awareness for veterans and athletes who have suffered and will suffer from CTE. All proceeds from The 38 Challenge will be donated to the Concussion Legacy Foundation.

"Matt was a born leader, a protector and a man who had a fierce love for his family, his friends, and his country," said Beth Barrington, Captain Brewer's mother. "It is our hope and prayer that through his death, Matt's life will continue to save and protect those suffering with CTE and PTSD as we grow in our understanding, treatment and support for those suffering with it."

If you or someone you care about needs help, you can access the CLF HelpLine at concussionfoundation.org/helpline.

Captain Matthew H. Brewer graduated from the United States Naval Academy in 2013 where he played football for the Navy Midshipmen. During that time, he set the record for most forced fumbles in a season and won the Brigade Heavyweight Boxing Championship. Upon graduating, Captain Brewer joined the United States Marine Corp and completed the Infantry Officer Course. He went on to serve as a Rifle Platoon commander and Combined Anti-Armor Team Platoon Commander with deployments to Japan and Korea. After successful completion of the Marine Special Forces Assessment Course (MARSOC), he served as the Special Operations Expert and Operations Officer with the United Nations Peacekeeping Force in Bamako, Mali. He finished out his military career as a Special Operations Officer at Marine Corp University in Quantico, Virginia.

Captain Brewer died on February 19, 2021 after battling severe symptoms characteristic of Chronic Traumatic Encephalopathy (CTE). According to the Boston University CTE Center, CTE is a degenerative brain disease found in military veterans, athletes and others with a history of repetitive brain trauma. CTE can only be confirmed post-mortem, and Captain Brewer's brain was unable to be studied. However, with his football, boxing, and military service career, along with his clinical symptoms, there is a high probability he had the disease.

Ally Financial Inc. (NYSE: ALLY) is a leading digital financial-services company with $181.9 billion in assets as of March 31, 2021. As a customer-centric company with passionate customer service and innovative financial solutions, we are relentlessly focused on "Doing it Right" and being a trusted financial-services provider to our consumer, commercial, and corporate customers. We are one of the largest full-service automotive-finance operations in the country and offer a wide range of financial services and insurance products to automotive dealerships and consumers. Our award-winning online bank (Ally Bank, Member FDIC and Equal Housing Lender) offers mortgage lending, personal lending, and a variety of deposit and other banking products, including savings, money-market, and checking accounts, certificates of deposit (CDs), and individual retirement accounts (IRAs). Additionally, we offer securities-brokerage and investment-advisory services through Ally Invest. Our robust corporate finance business offers capital for equity sponsors and middle-market companies.

For further images and news on Ally, please visit http://media.ally.com.

About the Concussion Legacy Foundation

The Concussion Legacy Foundation is a 501(c)(3) nonprofit organization. It was founded by Robert Cantu, MD, and Chris Nowinski, PhD to support athletes, Veterans, and all affected by concussions and CTE; achieve smarter sports and safer athletes through education and innovation; and to End CTE through prevention and research. For more information, please visit ConcussionFoundation.org.

The USO strengthens America's military service members by keeping them connected to family, home and country, throughout their service to the nation. At hundreds of locations worldwide, we are united in our commitment to connect our service members and their families through countless acts of caring, comfort and support. The USO is a private nonprofit organization, not a government agency. Our programs, services and entertainment tours are made possible by the American people, support of our corporate partners and the dedication of our volunteers and staff. To join us in this important mission and learn more about the USO, please visit USO.org or follow us on Facebook, Twitter and Instagram.