SANDY, Utah, Oct. 15, 2018  -- Ally Bank, the banking subsidiary of Ally Financial, today announced the start of a weeklong promotion for new deposits that serves as the second phase of its thought-provoking ad campaign to raise awareness that better banking options exist. 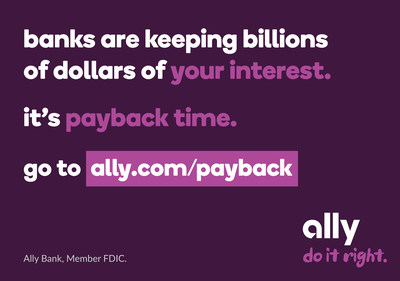 This promotion underscores the fact that consumers are missing out on billions of dollars of interest by leaving their money in traditional banks' savings accounts. Ally Bank is sending a message that "It's Payback Time" by offering consumers who enroll between October 15-21, 2018, an opportunity to earn a 1-percent cash bonus on new external funds deposited into an eligible Ally Bank account by Oct. 31, up to $1,000 per customer. The bonus is in addition to existing competitive rates offered on Ally Bank's savings products. To illustrate that point, Ally Bank built a calculator to help customers figure out their cash back bonus and interest earned on their deposit at www.ally.com/payback.

"It's not OK to merely be satisfied with what your current bank offers. Better is out there," said Diane Morais, president of Consumer and Commercial Banking Products at Ally Bank. "There are banks that provide exceptional service in addition to leading digital tools and believe a savings account should do more than just be a repository for your money. It also should work to grow your money. At Ally, we want your money to work harder for you."

An ally for financial well-being
The promotion follows an initial series of ads designed to capture the attention of consumers who bank with institutions that pay little to no interest on their savings. Ally Bank exists to be a true ally for its customers' financial well-being. In addition to Ally Bank's Online Savings Account rate, which is 20 times the national average, Ally Bank provides 24/7 customer service and online and mobile capabilities enabling customers to bank anyway, anywhere and anytime they want.

"Our message to consumers, conveyed in a series of ads, including this commercial, is 'The biggest bank heist in history is taking place right under your nose' and 'Your bank doesn't deserve your money, you do.' That's why we say now is payback time," said Andrea Brimmer, chief marketing and public relations officer. "The idea of this promotion is to prove there are banks willing to make money with their customers as opposed to off their customers. We feel passionately about this purpose and are excited to put our money where our mouth is with the single biggest promotion we've ever had in our nine years as Ally Bank."

Ally Bank even took to the streets of New York City today to show consumers just how crazy it was to willingly throw money away. A man-on-the-street style video will capture reactions of morning commuters appalled anyone would literally throw money away. But that is exactly what consumers are doing by leaving their money in traditional banks' low-interest savings accounts.